Schneider Children's for the Children of Ukraine A delegation of nine staff members from Schneider Children's including 4 doctors and 5 nurses and accompanied by a doctor from Soroka Medical Center, joined the group sent by the Ministries of Foreign Affairs and Health to Ukraine to establish an Israeli field hospital, and will oversee the pediatric sector at the site. Since Schneider Children's is a member of the European Children's Hospitals Organization (ECHO), the team is able to be in direct contact with leading pediatric hospitals in Europe and refer children to them according to need – as agreed between Dr. Efrat Bron-Harlev, CEO of Schneider Children's, and the heads of the hospitals in Europe during a special meeting of the organization that was arranged for this purpose.

Many private citizens, charities and businesses supported the cause with clothing, toys and games, hygienic products and more, among them Clalit's Papayaglobal Supply Authority, Citizens Advice Bureau, Friends of Schneider Children's and Our Children's Organization. As part of the mission, Schneider specialists were assisted by the "Hololens", virtual reality glasses, which were donated to the hospital by Microsoft Israel and which allows doctors to view patients from a distance through the Teams App, in order to assess and provide advice in various clinical scenarios. The Hololens enabled Schneider doctors in Ukraine to consult from the field with their colleagues in Israel regarding patients in the field hospital.

Rescue Mission on the Romanian Border 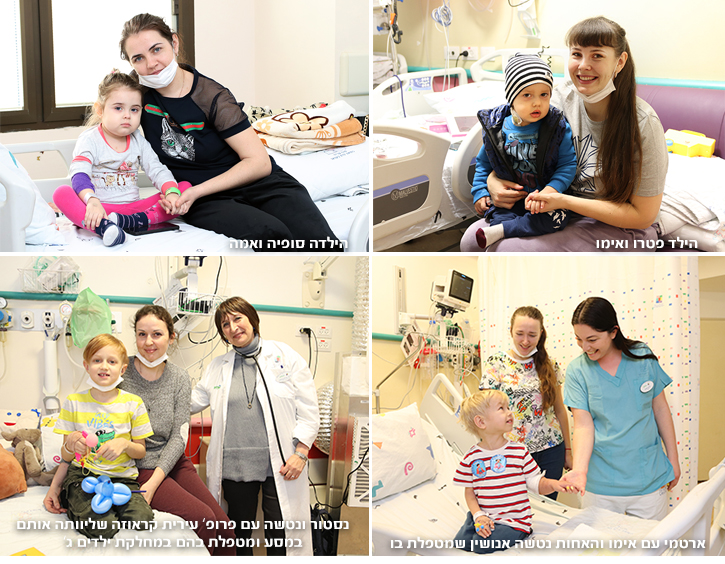 The delegation's departure was another stage in the readiness of Schneider Children's to provide assistance to the humanitarian tragedy happening in Ukraine since the outbreak of war. Already in the second week of the war, a team from Schneider left on a special rescue mission to the Romanian-Ukrainian border in order to fly to Israel 11 critically ill children who had arrived with their parents from a children's hospital Kyiv, and who needed urgent medical attention and life-saving care. The medical team that participated in the mission included two doctors and two nurses who spoke the language: Prof. Irit Krause, Director of Pediatrics C, Dr. Avichai Weisbach, senior physician in the Intensive Care Unit, Nurse Yulia Nikitin from Pediatrics C, and Nurse Natalia Sirota from the Intensive Care Unit. At the border, they met the children and their families who had arrived after long days of travel from the war zones, and undertook initial clinical assessments of their conditions. Afterwards they all boarded the plane with appropriate medical equipment for the flight to Israel. The children, among whom were cancer and dialysis patients, arrived at Schneider's ER and were referred to the relevant departments according to the treatment they needed.

"We had to do something"

The rescue mission, that took place jointly with the Ministries of Foreign Affairs and Transport, was made possible through the scores of private citizens and businesses who stepped up in support. The complex logistics were organized by businessman Ofer Krasner, Honorary Consul of Ukraine in Jerusalem, and the owners of City Capital Group together with Rafael Yocha, CEO of City Capital Group in Kyiv. The special flight that brought the children and their parents to Schneider was organized and funded by businessmen Ami Lustig and Roi Ben Yami from the LR Group.

At the same time, against the background of reports about serious shortages of medications in Ukraine, Schneider Children's began to collect surplus life-saving pediatric drugs for children with CF (cystic fibrosis) and sent them to Ukraine en masse. Dr. Efrat Bron-Harlev, CEO of Schneider Children's, summarized the activities, "During these difficult days of war in Europe, it was clear to us that we had to do something. The devotion of Schneider Children's reflects our status as the one and only hospital willing to go above and beyond for children around the world. I applaud the volunteer spirit of our entire staff who are infused with a clear sense of their important mission. We are here for all children wherever they may be."

Schneider in the Media

Israeli hospital in Ukraine continues to accept patients: "they wandered around for days without any shelter"
Walla, March 23, 2022
The first patient in the hospital was a girl of 12 years with cardiac problems, who was referred to the pediatric section under the supervision of the team from Schneider Children's. During her treatment, the sirens went off and everyone went down to the shelter. "We Israelis are already used to sirens, the locals were more afraid. We hope we can create small hope here."

Concern without borders
Yediot Aharonot, March 23, 2022
With enormous compassion and sensitivity, the medical teams of the Israeli hospital "Shining Star", who have initiated activities in Ukraine, provided sympathy alongside medical care.

The Aliya from Kyiv – and the return with the Israeli delegation: emotional closing the circle of Dr. Segal
Walla, March 21, 2022
Michael Segal was born in Kyiv and immigrated to Israel alone. One of the doctors who will be sent by Schneider Children's is Dr. Michael Segal from the Department of Surgery, born in Kyiv and made Aliya by himself a decade ago – and now will return to Ukraine as part of the mission. "This is very personal for me, we will do everything we can".

The fight (war) for recovery
Yediot Aharonot, HaMusaf LeShabbat, March 18, 2022
They escaped from the threat of the bombing, en route to a strange country where they will continue to fight for their lives. Children and youngsters, some with cancer and others with severe renal disease, were rescued from Ukraine in a complicated mission and arrived at Schneider Children's.