Alexius Prixus, aged 7½ from Cyprus, arrived recently at Schneider Children's to undergo a life-saving kidney transplant. The kidney was donated by his mother
Date: 02.01.23 | Update: 04.01.23 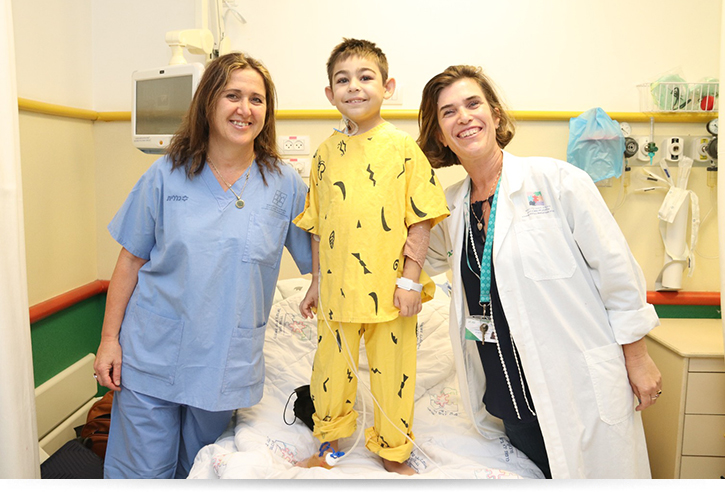 Alexius Prixus, aged 7½ from Cyprus, arrived recently at Schneider Children's to undergo a life-saving kidney transplant. The kidney was donated by his mother.

Alexius was born with a developmental illness which caused kidney dysfunction, and he underwent dialysis at a hospital in Cyprus from the age of 4 months. When his condition deteriorated, and since organ transplants are not performed in children in Cyprus under the age of 10 years, the Cypriot Health Ministry appealed to Schneider Children's which recommended he be flown to Israel to undergo the operation after compatability had been determined by Schneider's transplant coordinator, Naomi Zanhandler. Alexius subsequently arrived in Israel with his parents. Preparations for the transplant were performed by Dr. Hadas Alfandary, senior nephrologist in the Nephrology Institute at Schneider Children's.

The two procedures – removal of the kidney from Alexius's mother and the transplant – were conducted with success at Schneider Children's by a team from the Kidney Transplantation Service headed by Dr. Sigal Eisner. Following the surgery, the mother was transferred for continued care to the neighboring adult hospital while Alexius was admitted to the Pediatric Intensive Care Unit headed by Prof. Elhanan Nahum, and thereafter, he was transferred to Pediatrics C Department headed by Prof. Irit Krause.

Nicoletta Prixus, mother of Alexius, said that "on behalf of Alexius, we would like to thank the entire team at Schneider from the bottom of our hearts for their care, support and encouragement which made us feel as close to home as possible."

Schneider Children's is among the few pediatric centers in the world that is capable of performing multiple organ transplants at one time. Transplantation of a live donor kidney is particularly complex requiring special preparation of the various teams comprising pediatric organ transplant surgeons, nephrologists, anesthetists, ultrasound technicians, operating room nurses, intensivists and more. As part of the procedure, both donor and recipient are placed simultaneously in adjoining operating theaters. Initially, the kidney is removed from the donor and then transferred for implantation in the recipient.

Schneider Children's conducts the majority of organ transplants in children in Israel. Since its inception, more that 700 transplants of heart, lungs, liver and kidneys have been transplanted into infants, children and adolescents with a degree of success on a par with leading medical institutions in the world.