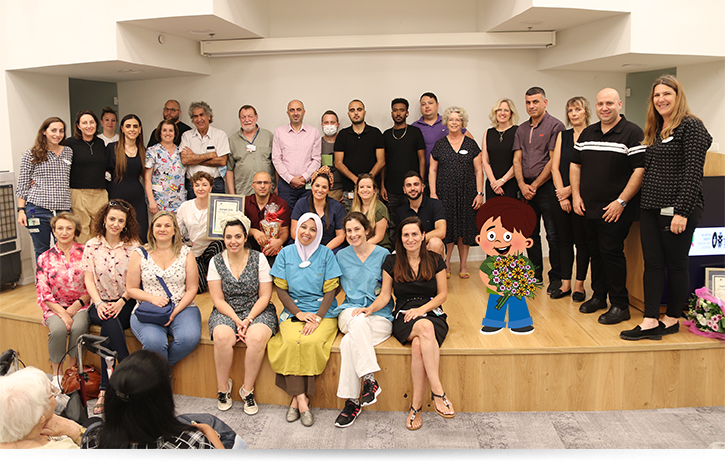 The recipient of the CEO of Clalit's Prize for 2021 at Schneider Children's is Ihab Tsartsur, chief medical equipment technician at the hospital. Ihab was selected among 25 outstanding employees worthy of the CEO's Prize due to their diligence, personal achievements, compassion, professionalism, sensitivity and humanity they displayed in their duties. Ihab is a resident of Kfar Kassem, married and father of five, and a BA graduate of the Health Systems Authority at Ariel University with a professional diploma in medical devices from Clalit Tel Aviv.

Ihab started working at Clalit and Schneider Children's in 1994 initially as a respiratory devices technician, a post he held for 15 years, and thereafter until today, he has served as chief medical devices technician, the first such appointment in Clalit. As part of his duties, he oversees the operation of diagnostic and therapeutic medical devices including preparation, callibration and attachment of machines to patients; instructs and directs the medical devices technicians in the hospital; is the professional head of a 34-member team; and is responsible for identifying sources of interference and distress in patients during examinations, and warns doctors accordingly. In addition, he supervises the proper working of equipment in his field and conducts control checks regarding device maintenance alongside Clalit's medical engineers.

Prizes were also were presented to outstanding employees at Schneider Children's for 2021 to four team members and two teams in tribute to and acknowledgement of their dedication and initiative shown during the past year. The Hospital CEO's Prize was awarded to Dr. Joanne Yaacobovitz, Head of the Hematology Unit in the Hemato-Oncology Department; Rami Atzmoni, a clerk in the medical records department; and the team in Cardiac Intensive Care Unit and Cardiothoracic Surgery. Certificates of Recognition were presented to Maria Tichonov, a registered nurse in Infectious Diseases, Neonatology and Neonatal Intensive Care; Etti Tzur, who oversees employees' interests in the Human Resources Department; and the team in the Computer Unit.

Dr. Efrat Bron-Harlev, CEO of Schneider Children's, noted that "all of our outstanding employees are instilled with exemplary dedication, professionalism and humanity. Their recognition reflects the excellence of above and beyond and therefore their awards are deserved and bring pride." She further noted that "Ihab represents consensus in the hospital. He provides an exceptional standard of service both to the children and their parents, as well as to the medical and nursing staff, for whom he is a key guide and advisor, and thus a model worthy of imitation. Ihab is a central figure in planning needs and acquisitions in his field in anticipation of the opening of Schneider's glass building, he is a member of the Acquisitions Committee at Clalit Headquarters and is the point person for consultation by the medical technologies and acquisitions divisions. In times of alert, Ihab proves himself above and beyond: for instance during Guardian of the Walls War, all children on ventilators in the hospital were moved to the protected shelter and Ihab, who was on vacation, arrived at the hospital and played a significant role in the patients' transfer with an extraordinary calm, quiet and professional demeanor."