The unique operation took place at Schneider Children's with the cooperation of Beilinson Hospital
Date: 31.05.22 | Update: 07.06.22 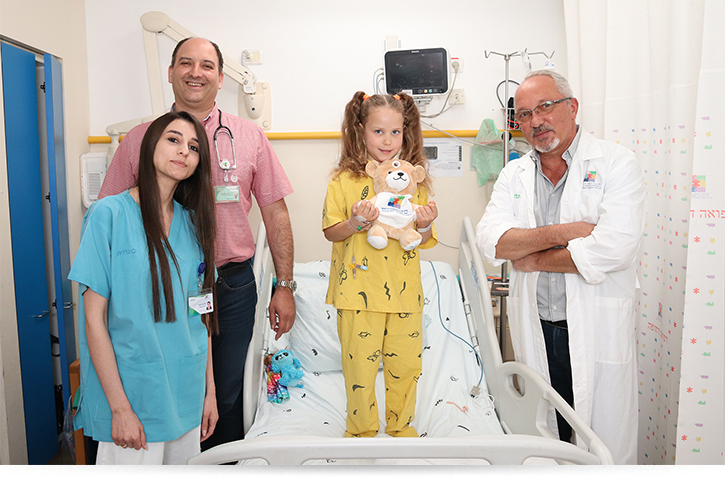 
Five-year-old Kira was born with a rare defect called congenital pulmonary airway malformation (CPAM) that appears in about 1:30,000 pregnancies. The cause is unknown. In CPAM, entire lung lobes are replaced by cystic masses of abnormal lung tissue. In most cases, a fetus with CPAM is closely monitored throughout pregnancy and the defect surgically excised after birth or at the age of 6 months due to the risk of recurrent lung infections. These operations are based upon the thoracoscopic technique.

In Kira's case, the defect was only diagnosed recently following pneumonia, necessitating excision of the lung lobe due to the danger of the tissue becoming malignant. Because of the late finding, standard operative techniques for CPAM were unsuitable, and it was decided to utilize the da Vinci surgical system, a robotic-assisted minimally invasive surgery technique representing forefront of surgical technology and robotics.

The da Vinci system is controlled entirely by the surgeon, whose hand movements are translated by the robot rotating the instruments like a human hand, and delivering magnified 3D high-definition resolution views of the surgical area. As a result of the keyhole technique, only a small scar remains, there are fewer complications, reduced bleeding, a shorter hospital stay, and a more rapid return to routine. The operation was conducted in cooperation with Beilinson Hospital; the team included Dr. Yuri Paschovich, Head of Thoracic Surgery at Beilinson and Drs. Michael Segal and Anastasia Almog from Schneider's Department of Surgery.

Dr. Paschovich noted that "up until now, thoracic surgeries in children to remove masses and excise parts of the lung were performed through thoracoscopy. These operations in small children demanded extremely delicate and precise movements as well as the ability to successfully navigate through difficult-to-reach areas. Da Vinci system robotic-assisted procedures on the other hand utilize minute instruments that act like flexible arms and have a maximum range of motion, alongside a mechanism that prevents the light but natural tremor of the human hand. In addition, the system offers a huge advantage in conducting thoracic surgeries: since there is a limited area for entry between the ribs, it assists us by allowing the location of the camera to move thus according greater flexibility and enabling the smallest incisions."

Dr. Segal added that "Schneider Children's has conducted more than 80 successful surgeries in the past decade using the minimal invasive technique in children up to the age of one year. In older children, such as in the case of Kira, robotic-assisted surgery is an excellent alternative. I joined Dr. Paschovich, who has broad experience in performing successful thoracic surgeries with the da Vinci robot, and was very impressed. This led to the collaboration between the two hospitals and the idea to perform the operation together. As a hospital that utilizes cutting-edge technologies, we hope to adopt this technique also in the realm of pediatric surgery at Schneider in order to develop additional possibilities and to maximize the quality and effectiveness of care for children."