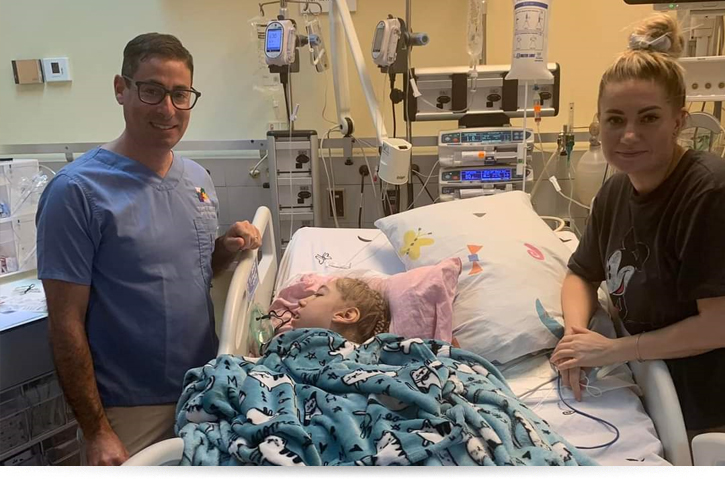 
Liza, a 14-year-old refugee from West Ukraine, arrived on a special flight to Israel in order to undergo a unique procedure at Schneider Children's. She suffered from severe cerebral palsy (CP) and high muscular tone (spasms), a clinical condition where muscle tension is higher than normal resulting from damage to the central nervous system, causing all the muscles to contract thus inhibiting movement of the limbs.

Liza arrived in Israel to receive compassionate humanitarian care through the MMS medical tourism company, and was sent to Schneider Children's to undergo a rare procedure called Dorsal Root Entry (DREZ) Lesioning. The operation was successfully performed by Dr. Amir Kershenovich, Director of the Neurosurgery Unit at Schneider Children's, and is used in cases where patients suffer from spasms and severe contractions with loss of movement, leading frequently to intense pain. Contractions typically lock the joints due to the high muscle tone with the loss of the patient's ability to move them.

According to Vita, Liza's mother, "this special undertaking required passing through three borders by car, the flight to Israel including requisition of an ambulance at the airport in Israel, and finally arriving at Schneider Children's. Liza arrived ill and the operation was postponed twice. During three tension-filled weeks, we waited for the surgery during which her condition did not improve until the big day arrived. The first thing that impressed me after the operation was the warmth of Liza's body. Because of the condition of her health, her hands and feet were always stiff and cold, irrespective of the weather, and now, for the first time, her body felt warmer and softer. I am deeply grateful to the hospital and to Dr. Kershenovich who operated on Liza and calmed us greatly during the entire process. The road is still long, but we are very hopeful that Liza will have a better future."

Dr. Kershenovich noted that "this was a case of a very damaged child who asked to come to Israel for more than a year, but sadly, this did not happen due to corona. Radislav Magdayev of MMS appealed to Schneider after he had heard about the hospital's rescue mission which brought 10 Ukrainian children to us for treatment. He asked us to accept Liza who was suffering greatly. We agreed to operate on her, and it is very exciting to see her with the ability to make all movements for the first time in her life."