From the Battles in Ukraine to the Fight for Life

Ilona from Ukraine was brought to Israel together with her parents on a special medical flight to undergo an emergency liver transplant at Schneider Children's
Date: 22.05.22 | Update: 31.05.22 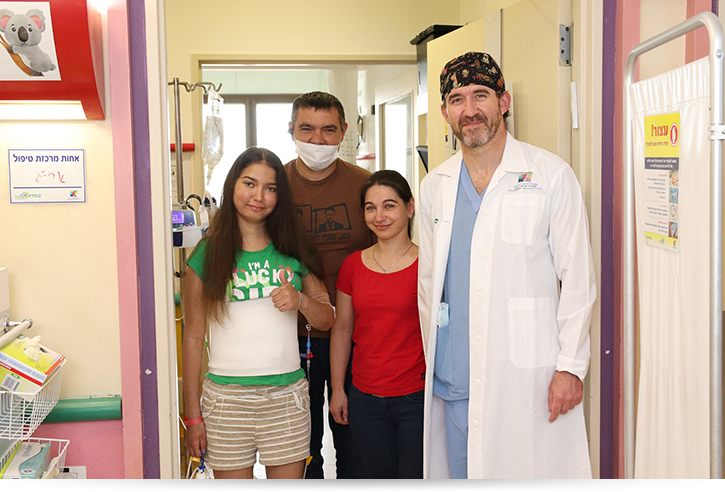 Dr. Gurevich (r) with Ilona and her parents

Ilona, aged 13 from Ukraine, was brought to Israel together with her parents on a special medical flight arranged by the Polish government in cooperation with Schneider Children's. Ilona had been diagnosed with Wilson's disease and needed an emergency liver transplant. The management of the hospital, the one and only center in Israel that conducts liver transplants in children, received the request from the family and responded immediately with preparations for the anticipated transplant.

Wilson's disease is an inherited disorder characterized by the accumulation of copper within the cells of the body, in particular the liver, brain and kidneys. This excess can lead to cirrhosis and scarring the liver tissues which interrupts blood flow and culminates in hepatic dysfunction. The damage is irreversible and the only option for recovery is a liver transplant.

The liver lobe was donated by Ilona's father, who was found to be compatible. The transplant ensued a few hours. Heading the team was Dr. Michael Gurevich, Director of the Liver Transplantation Unit at Schneider Children's, Dr. Sigal Eisner, Director of the Kidney Transplantation Service, and team members in the Operating Rooms and Anesthesia Department headed by Dr. Yelena Zeitlin. Following the operation, Ilona was transferred to the Pediatric Intensive Care Unit and thereafter to Pediatrics C.

Ilona's parents asked to convey that "the news about our daughter's complex condition caught us in a difficult situation both due to the fighting in our homeland as well as the unknown about tomorrow. Thanks to the Polish government and other good people who helped us, we were able to come to Israel and to Schneider Children's which conducted the operation and accompanied us throughout the recovery process. There are not enough words to thank the amazing staff for the devoted care they gave us and for making us feel as close to home as possible."

Dr. Efrat Bron-Harlev, CEO of Schneider Children's, said that "every day, Schneider Children's realizes the vision to serve as a bridge to peace, the one and only hospital going above and beyond for all children worldwide. Due to the humanitarian rescue mission, we received a very sick girl at Schneider Children's, who needed an urgent liver transplant that could not have taken place in the current war situation in Ukraine. We feel privileged to have the ability to treat and save children's lives wherever they may be."

A liver lobe transplant from a live donor to a child is especially complex demanding particular preparation of medical teams comprising pediatric organ transplant surgeons, ultrasound technicians, gastroenterologists, anesthetists, surgical nurses, intensivists and more. During the procedure, both donor and recipient are wheeled into two adjoining operating rooms. The liver lobe is extracted from the donor and then taken into the second operating room for implantation into the child's abdomen.

Schneider Children's conducts the majority of organ transplantations in children in Israel. Since its inception, more than 700 transplants of heart, lungs, liver and kidneys have been performed in infants, children and youth with a rate of success on a par with leading medical centers in the world.