A marathon of 5 organ transplants took place within the space of one week at Schneider Children's highlighting International Kidney Day
Date: 22.03.22 | Update: 25.04.22 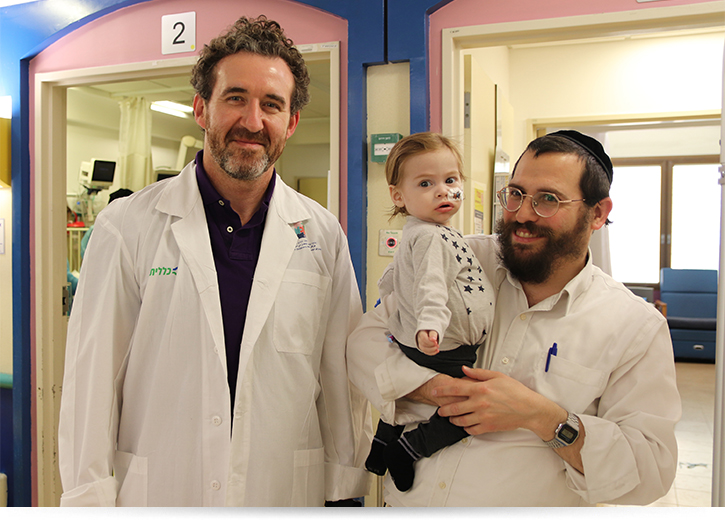 David Ehrenberg, who received an altruistic donation of a liver lobe, with his father and Dr. Michael Gurevich, Director of Liver Transplantations at Schneider Children's

As part of International Kidney Day being marked around the world, Schneider Children's highlighted the issue of kidney transplants in children in order to raise awareness. An impressive display was placed in the lobby of the hospital replete with stories of organ recipients and medical team members who treated them. Since the beginning of the year, 5 kidney transplants have already been performed at Schneider.

At the same time, a marathon of organ transplants took place at Schneider Children's when five children received the gift of life due to organ donations: two livers, two kidneys and one kidney and liver were transplanted into children within the space of one week.

The liver and kidney transplants were performed by Dr. Michael Gurevich, Director of the Liver Transplantation Unit at Schneider and Dr. Sigal Eisner, Director of the Kidney Transplantation Service at Schneider and senior physician in the Transplantation Department at Beilinson Hospital. The operations were conducted in cooperation with the Surgical Suite and the Anesthesiology Department at the hospital headed by Dr. Yelena Tzeitlin. Following the procedures, the children were transferred to the Pediatric Intensive Care Unit headed by Prof. Elhanan Nahum after which they were transferred to Internal Pediatrics.

Schneider Children's conducts the majority of organ transplants in children in Israel. Since its inception, more than 700 transplants of hear, lungs, liver and kidneys have been performed in infants, children and adolescents at a rate of success on a par with leading medical centers in the world.