Treatment by individually adapted helmets has been introduced at Schneider Children's for infants with skull distortions and asymmetry of the head
Date: 13.03.22 | Update: 14.03.22 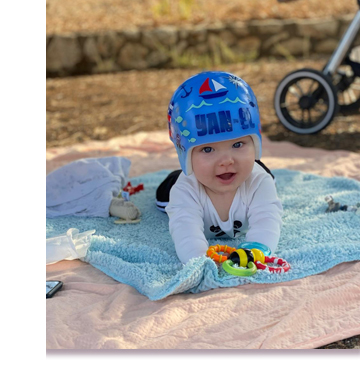 A unique service has been introduced at Schneider Children's: a clinic for the individual fitting and adjustment of helmets for infants that significantly improves cranial and asymmetric distortions of the head structure. The new treatment is provided by two specialists who studied the advanced technique for a number of years in children's hospitals in the United States, and who have brought their expertise to Schneider Children's: Dr. Amir Kershenovich, Director of the Neurosurgery Unit and Dr. Asaf Ulshinka, senior plastic surgeon and specialist in in craniocephaly surgery in the Plastic Surgery Unit. The Helmet Clinic recently welcomed Yishai Shakarchy, who holds a BSc from St. Petersburg College in Florida, USA, and is a registered orthotist from the American Academy of Orthotics.

Skull distortions and asymmetry in infants is mainly due to positional plagiocephaly, or flat head syndrome, where one or both sides of the head is flattened at the back as a result of asymmetrical pressure.

Between 10%-20% of newborns suffer from positional plagiocephaly, or flat head syndrome, where the skull appears asymmetrical and is caused by exterior pressure that distorts the head. This pressure can be due to the infant lying on his back for a long time. The biggest change occurs in the infant's first months of life, when the skull bone is flexible and can become easily distorted. Flattening of the head does not affect the development of the infant's brain, and the reason for treatment is to improve the aesthetic shape of the head, thus avoiding future problems with body image. Early and appropriate intervention will help to prevent or reduce the severity of the flat head.

The helmet is an effective treatment if begun early at the age of 3 months and before the age of one year at the latest, because at these ages the bones of the skull begin to harden and unite. The helmet prevents the skull from growing in other directions and "forces" the brain to push the bone outwards where it has flattened. The helmet is worn for 23 hours a day throughout 4 months on average. The treatment does not require surgical intervention, only follow-up of changes in the exterior appearance of the head. Helmet therapy has been approved by the FDA and the Ministry of Health.

A less common condition is craniosynostosis, a premature joining of the sutures in the baby's skull bones. 1:3000 newborns have this rare condition, requiring surgical intervention at a very early age in order to reduce intracranial pressure, respiratory disorders, neurocognitive impairments and the risk of damage to the brain's development in addition to the obvious aesthetic deformity.

The classic method of treatment is open surgery to realign the bone structure when the infant is 8 to12-months-old on average. Schneider Children's utilizes an innovative surgical technique to correct craniosynostosis through minimal invasive surgery (MIS) by removing the prematurely closed suture (suturectomy) and then realigning the skull through the individually-adapted helmet. MIS is conducted between the age of 2-6 months. In comparison with the open surgical approach, MIS is significantly shorter (an hour compared to 4-5 hours), leaves a much smaller scar (compared with the broad ear to ear scarring), is much less dangerous, and requires a shorter hospital stay. Another advantage is the systemic growth of the skull after surgery as opposed to the classic approach. Post-surgery, the infant is fitted with the helmet which is worn permanently for the next 6 months on average.

The Helmet Clinic is the only one of its kind in the country, and treatment is provided to infants who are individually fitted with helmets. Helmets have been in use for some years at leading pediatric centers in the world. The treatment for craniosynostosis falls within the health basket of services and is thus free of charge. The treatment for positional plagiocephaly, however, is not within the health basket and a fee is charged.