International research by specialists at Schneider Children's have found that antibiotics given to infants hospitalized with RSV are not effective in preventing asthma and recurrent wheezing episodes. The results of the research were published in the New England Journal of Medicine–Evidence
Date: 28.02.22 | Update: 03.03.22 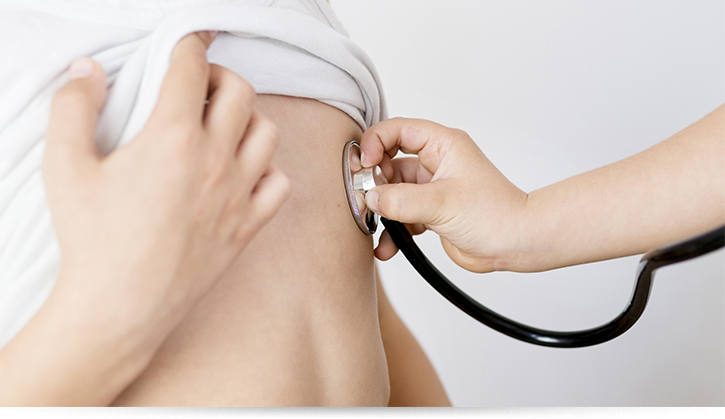 Research conducted by specialists at Schneider Children's and doctors at Vanderbilt University Washington DC has found that the administration of antibiotics to infants hospitalized with RSV is ineffective in preventing asthma and the development of recurrent wheezing episodes. The findings were presented on February 27, 2022 at the annual conference of the American Academy for Allergy, Asthma and Immunology in Phoenix, AZ, and published simultaneously in the prestigious New England Journal of Medicine – Evidence.

The study was headed by Prof. Avraham Beigelman, Director of the Institute of Immunology and Allergy at Schneider Children's and an Associate Professor at Washington University in St. Louis, Tel Aviv University, Children's Hospital of St. Louis and Washington University in St. Louis. The research was supported by a grant from the National Heart, Lung and Blood Institute (NHLBI) of the American government's National Institutes of Health.

The researchers investigated the efficacy of the azithromycin class of antibiotics administered to prevent the development of recurrent wheezing attacks in infants hospitalized with broncheolitis caused by the Respiratory Syncytial Virus (RSV). These infants are at increased risk of developing asthma later on in childhood and the doctors hoped to find a new treatment approach to prevent this from occuring.

RSV can lead to broncheolitis, an infection of the airways in infants. It is a common infection among children in their first two years of life, but only a small percentage develop severe broncheolitis requiring hospitalization mainly for oxygen ventilation. In the West, broncheolitis represents the most common cause for admitting infants during the winter months. Babies who are hospitalized with RSV are at an increased risk of developing asthma in childhood.

"About half the infants hospitalized with RSV will develop asthma up till the age of 6," said Prof. Beigelman, chief investigator of the study. "We have been examining ways for many years to prevent the development of asthma following RSV-induced broncheolitis. The components of the azithromycin antibiotic fight other lung infections such as Cystic Fibrosis. Previous research we conducted showed that azithromycin has the ability to reduce infection in the airways, and so it is possible to prevent recurrent wheezing events after RSV-caused broncheolitis. These studies gave us the rationale to a broader investigation in infants hospitalized with RSV, and therefore we were surprised with the negative findings of the present research."

It should be noted that the research was not planned to examine the differences in the influence of various types of antibiotics. Yet the researchers found evidence of the increased risk for recurrent wheezing episodes among infants who received other antibiotics such as amoxicillin (moxipen).

"It is possible that there is an increased risk of recurrent wheezing as a result of the use of all antibiotic medications in nursing infants," adds Prof. Beigelman. "This is a most important message for all pediatricians, because antibiotics are given frequently to infants with RSV-induced broncheolitis, despite the fact that clinical protocols do not support this treatment route. The research findings concluded that one can say that azithromycin and antibiotics in general do not have the best therapeutic effect in preventing recurrent wheezing attacks following RSV, and it is also possible that they have a negative effect."