A few weeks ago, for the first time in Israel, tailor-made treatment was performed in a 6-month-old infant who suffered from a life-threatening viral infection following bone marrow transplantation; the infant totally recovered
Date: 23.02.22 | Update: 03.03.22 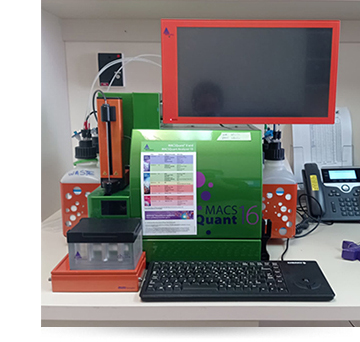 An advanced technological system called the Cytokine Capture System (CCS) was recently introduced in the Bone Marrow Transplantation Unit (BMTU), which is part of the Hemato-Oncology Division at Schneider Children's, headed by Prof. Shai Izraeli.

The innovative therapy utilizes anti-viral T-cells to treat viral infections in immunosuppressed children undergoing bone marrow transplantation (BMT). The CCS isolates the specific T-cell lymphocytes in the donor's bone marrow which then administered to the recipient to fight the virus, thus enabling the child to recover until the body's own immune system kicks back in. The procedure is risky, because the lymphocytes could lead to an immune attack on the transplanted organ, a phenomenon known as Graft Versus Host Disease (GVHD).

"The technological advancement of cell therapy enables us today to provide new treatments which until recently could only be imagined," said Dr. Asaf Yanir of the BMTU and BMT lab for programming stem cells at Schneider. "By using advanced technologies in the lab, we can isolate the donor's blood specific T-cell lymphocytes from the bone marrow which are then programmed to fight against a certain virus, but are rendered incapable of attacking the cells in the recipient to avoid GVHD. Once the cells are administered to the patient, they attack and eradicate the virus without causing any harm to the child's healthy organs. This procedure, which from the standpoint of the patient is very simple and administered in the clinic, is a real revolution in the treatment of infections in immunosuppressed patients."

A few weeks ago, for the first time in Israel, cells were isolated in this fashion and administered to a 6-month-old infant who suffered from a life-threatening viral infection after undergoing a BMT. Six weeks later, there was no molecular evidence of any viral infection in her blood, and from the clinical perspective, she was totally cured, and even remained at home throughout the entire period.

The CCS requires sophisticated technological equipment alongside skilled human capability (the lab staff at Schneider Children's underwent intensive training in the use of the advanced system). The PRODIGY conducts the actual isolation of the cells, while the MACSQUANT device further enhances this life-saving therapy. Both devices were acquired following a contribution received from the Friends of Schneider Children's Association.